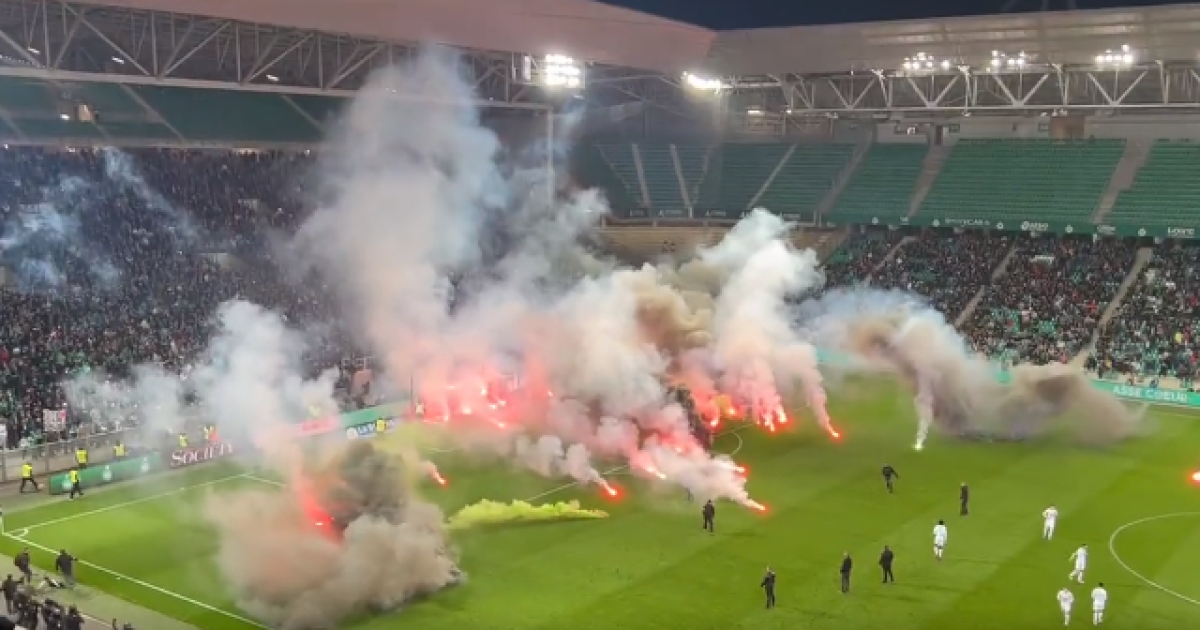 All eyes – and concerns – were on the classic OM – PSG, scheduled for this Sunday … But it was this Friday evening and on the side of Saint-Etienne that the supporters finally made the talk.

The supporters of the Greens, red lantern of Ligue 1, have indeed expressed their anger, from the entry of the players on the lawn and even before the kick-off, by sending very many smoke on the ground, blackening the lawn by places. Some Saint-Etienne supporters have also come down from the stands to try to enter the field. The deployment of security forces was necessary to prevent this attempt to invade the completely smoky terrain.

According to “L’Equipe” and France Info, the smoke also caused holes in the goal nets. The referee decided to send the two teams back to the locker room while the repair was done. The kick-off of the match is now more than 40 minutes late.

The Greens have not won any match since the start of the Ligue 1 season. Supporters are demanding the departure of the team’s coach, Claude Puel.

Not enough stewards, not trained enough

These events come after previous excesses in Nice, against Marseille, at the end of August, then in Lens, against Lille, in September… The Minister in charge of Sports, Roxana Maracineanu, then advocated a reflection with the clubs on the subject. “It is their duty to ensure security with their stewards, the training of the stewards, who may have lost the habit of being there. “

“For a year and a half without a stadium, we lost our habits a bit”, abounds Nicolas Hourcade, sociologist specializing in supporterism.

“In the stewardship companies, after sixteen months without work, there has been a considerable turnover, with now people who have less experience. “

A little rusty after the periods of total or partial lock-up, the sector has to face more generally a shortage of manpower. “With the pandemic, many security guards have found in the same job places where they can work longer hours, such as shopping malls, vaccination centers and some have completely changed jobs and are no longer in this branch. “, explains Xavier Pierrot, deputy general manager in charge of the Olympique Lyonnais stadium.

“When you put an agent to work between 20 and 30 hours per month, it’s impossible to have people who are trained to work only in stadiums or arenas. They all have multiple jobs. “

Low pay and time constraints (work evenings and weekends) do not encourage applications either. “For jobs as stewards paid at the minimum wage, some have deserted the profession in the face of the absence of events due to the Covid and they have opted for jobs which, with the same salary, allowed them to have their weekends for example “, notes a security guard who wishes to remain anonymous.

“Faced with this recruitment problem, the companies take a little what they find …”

Faced with recruitment difficulties, clubs often have to resort to several security companies. ” Three “ for OL, confides Xavier Pierrot and up to “Seven different structures”, in Saint-Etienne! That is to say…