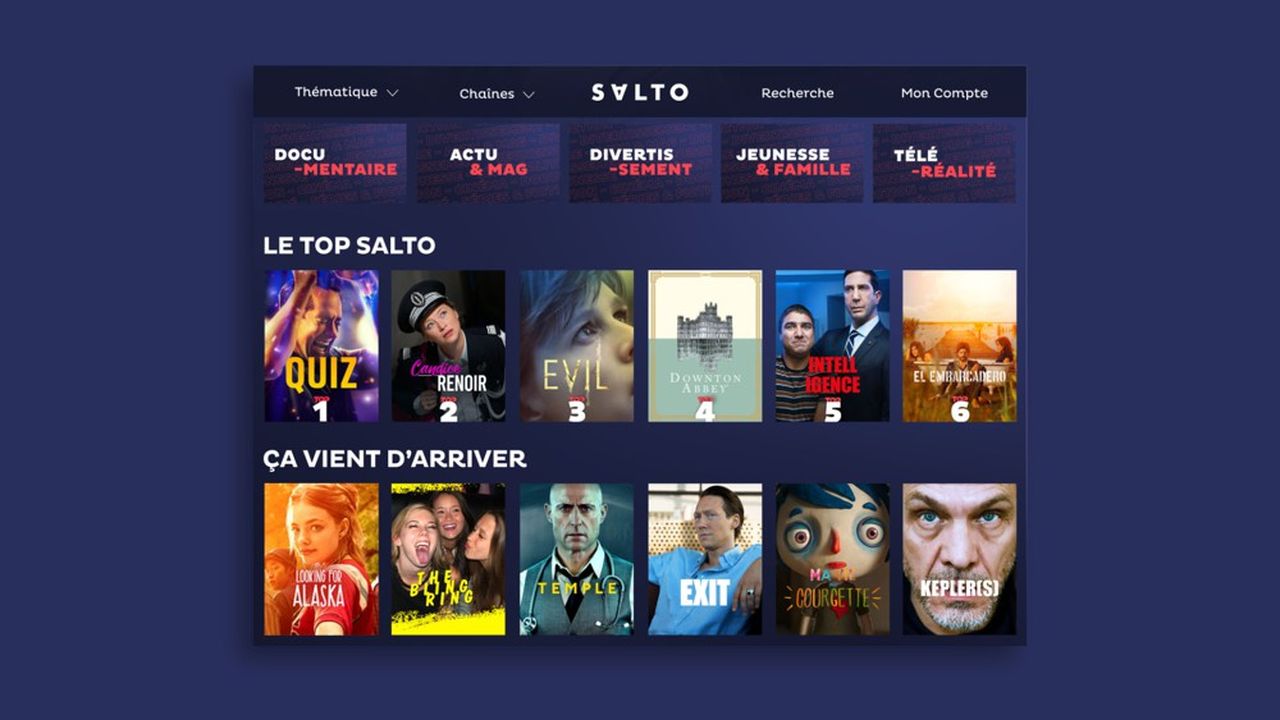 Salto, the platform of France Télévisions, TF1 and M6, will (finally) start, after several postponements, on October 20, but already has several handicaps. Thursday, during a press conference, which looked more like a commercial presentation and where hardly any question of the journalists (posed in writing) was retained, the leaders of Salto focused their presentation on the few unpublished programs of the future platform, which will however only represent a minor part of its content.

The paid platform, which aims to offer “the best of French creation”, will indeed mostly offer programs from its parent channels, already seen for free, on TV and on replay. We will also find some previews of French series such as “They were ten”, the possibility of viewing daily soap operas 48 hours in advance and unreleased foreign fictions, in France, such as “Exit” or “Evil”, as well as the cinema.

Another weak point of the platform, initially, Salto will not have its own content. However, the platform intends to offer them from April 2021: it participates in particular in the financing of documentaries such as “The sect” or of the fiction “Germinal” (co-produced by France Télévisions and RAI in particular), to have them in the foreground. first in France.

No details on the economic model

No details were given on the economic model and the objectives of this television UFO. “If Salto reaches 1 million subscribers in three years without the boxes, we can say that it is a success. By comparison, TV Now and Videoland, of the RTL group in Germany and the Netherlands have nearly 1.8 million subscribers in total ”, comments François Godard, at Enders Analysis. By way of comparison, Netflix, which landed in France in September 2014 was around 700,000 subscribers for its first anniversary and communicated on some 7 million in early 2020 and MyCanal also has 5 million subscribers.

Either way, Salto comes at a time of stiff competition with Netflix, MyCanal, Disney +, Amazon Prime Video etc, who have gained even more power during the lockdown. Their financial firepower allows them to buy or produce essential programs… .which will moreover be more and more “made in France”, with the new obligations to make them enter into the cultural exception. However, opposite, Salto only has a contained budget of 250 million over three years – a figure not confirmed by the company but never denied either. Salto is also behind on its forecasts: its leaders promised 15,000 hours from the launch, it will ultimately only be 10,000.

Agreements with telecom operators, but not immediately

Above all, Salto will not be able to benefit from the strike force of Canal +, the leading distributor of channels and services in France, which does not seem frankly prepared to sign a distribution contract with a competitor … Nor will it have the leisure to enter homes via the boxes of telecom operators, having no agreement with them either, which would have enabled it to reach a customer base of 38 million French people.

As for the price, it does not offer real attractiveness compared to the competition. The first offer at 6.99 euros for a screen (and up to 12.99 euros for four users) “Is the same as Disney +, while the catalog is much less rich! “, notes François Godard. The package at Netflix starts at 7.99 euros (up to 15.99 euros).

In recent months, the parent companies of Salto, which forged an unprecedented alliance for a digital platform in France, have clearly claimed their ambition to build an alternative to Netflix, a strong project, supposed to strengthen French creation. However, their absence from the Salto presentation conference on Thursday – only video messages from Delpine Ernotte, France Televisions, Gilles Pelisson, TF1 and Nicolas de Tavernost, M6 were broadcast – was noticed.

“It will be complicated for a TF1 or M6 to favor Salto … even if it means weakening”, comments a good connoisseur. “There are going to be a lot of dilemmas. And all the more so since the groups have distribution contracts with telecom operators which oblige them to have quality replay ”, press another. Not to mention that the Competition Authority has placed obstacles on the supply of parent companies. In short, nothing is won.