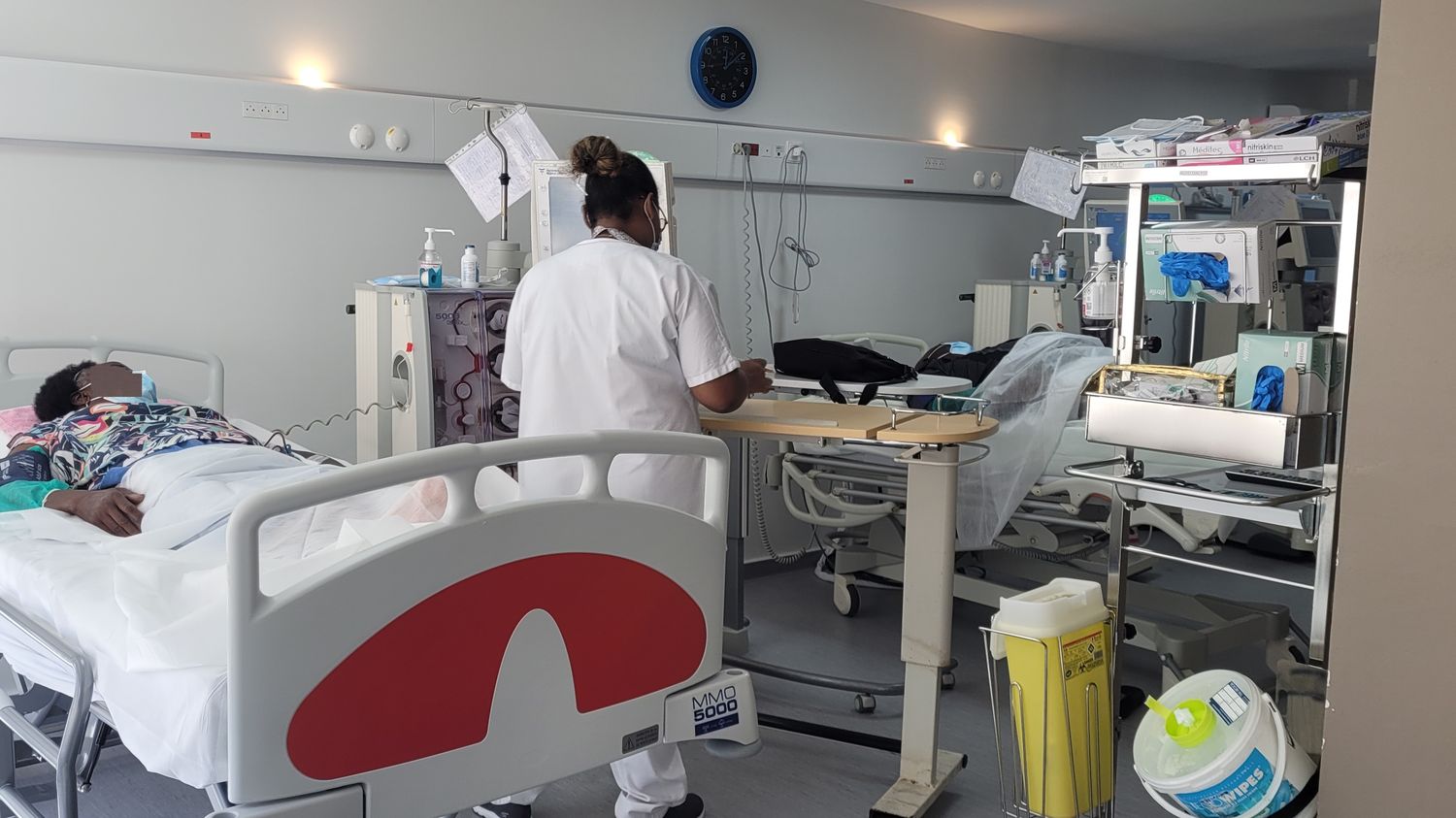 T-shirt with flowers and all dressed, Anne-Marie Hamony looks up after a “bobi”, a nap in the Creole language. This Wednesday, November 24, the 73-year-old patient is in the middle of a dialysis session at the Choisy du Gosier clinic, in Guadeloupe. It doesn’t sound like much, but it’s a small victory. The establishment of dams, for more than a week, has transformed the roads of the island into a maze. This time, despite an hour’s delay, his ambulance did not have too many problems from Morne à Louis.

Last Friday, on the first day of the social protest on the island, she was unable to go to the establishment. “It was really stressful”, explains the septuagenarian tested by uncertainty, lying with a catheter alongside the other patients.

“There are things that can wait, though, but not that. I was like, ‘Can I go to the clinic again for my dialysis?'”

It will succeed only two days later, at the cost of a few slaloms and an alternative route off the main roads. “The ambulance had to do a little gymnastics between the remains of roadblocks, the rubbish”.

Anne-Marie Hamony is not an isolated case. On Friday, only 120 of the 180 scheduled patients were able to carry out their dialysis in Choisy as planned. These postponements, however, pose serious health risks to these people with impaired kidneys, whose blood must be purified. As of Friday, the centers had also alerted on “a danger of death” for their patients, who require three weekly sessions. “There are two major risks”, explains nephrologist Kheira Hue: “Hyperkalemia, which can lead to cramps, even cardiac arrest. The other is cardiac decompensation, with acute edema of the lung”.

Elizabeth, 75, smiles and closes her digital tablet, on which she was watching a series. But she has had difficult days, even though she was luckier than her roommate last Friday. “The taxi knew side roads and we managed to get around the roadblocks. On the way back, I ran into three more roadblocks, and it took over an hour to get back, instead of the usual 25 minutes.”, describes the septuagenarian. “A lot of the kids were getting ready for the night, and the driver quickly backed up.”

“It’s a constant anxiety and I’m coming out of five sleepless nights. I’ve even taken tranquilizers, which I never do.”

“Ah, I only have half an hour left”, she observes after scrutinizing the screen. The duration of dialysis, in fact, was halved to be reduced to two hours. The center now closes at 5 p.m., compared to 11 p.m. usually, in order to allow patients, staff and paramedics to return before the curfew, set at 6 p.m. “It’s a waste of opportunity for patients”, comments Kheira Hue. She says that a patient “poorly dialyzed”, precisely, was admitted in emergency with an acute edema of the lung. Arrived from Sainte-Rose, a town particularly isolated by the social movement, he “had to walk a few meters, suffocating to cross the roadblock and go from one ambulance to another”.

Some patients with severe kidney disease, moreover, require a biopsy to establish a diagnosis, but this service is no longer provided at the Pointe-à-Pitre University Hospital. “So I’m trying to get them to leave for France to avoid a loss of chances. I have six leaving, the next one takes off on Saturday.” Between two phone calls to write proof of dialysis, supposed to serve as a pass to the roadblocks, Kheira Hue points to two travel bags placed on a desk, as well as lemons wrapped in aluminum, offered by a patient.

Staff, patients and security guards who so wish are now accommodated on site, to avoid being stranded. Interventions had to be deprogrammed in the medical service in order to fit out this temporary “hotel”. The management even hired a sea shuttle for the attention of the staff. This measurement will be “accompanied by financial support from the ARS”, assures the director of the clinic, Sébastien Tournebize.

But the difficulties also relate to home hospitalizations – a hundred are supported by the clinic. “The nurses are afraid to pass the roadblocks, and some sometimes feel pressed for time”, explains Adrien Niberon, director of care. “It is all the more difficult as these patients at home require a high level of care, and a quarter of them are in palliative care.”

Every morning, the teams make a point to identify inaccessible patients, based on feedback from the nurses. “On Monday, in Mare Gaillard, a patient had to walk to an ambulance to be hospitalized.” Therapeutic gesture aid booklets, designed to respond to cyclone situations, were sent to the households concerned in inaccessible areas. “Caregivers and patients even had to stop an infusion or a subcutaneous injection themselves, while we guided them by video”.

“Every day is different. We can successfully visit a patient at 9 a.m. and they become unreachable at 5 p.m.”

Adrien Niberon, director of care at the Choisy clinic

“There is no visibility over the next few days and it is quite anxious”, agrees the director, Sébastien Tournebize. “We experienced a fairly similar crisis management after the passage of Hurricane Irma in 2018”, he adds. “I am proud of my staff but watch out for wear and tear”, in a context loaded by the mobilization against the vaccine obligation.

The situation is tending to calm down, however. The day before, franceinfo was able to observe, on a roadblock in Gosier, that the demonstrators allowed ambulances, Samu and nurses to pass without difficulty, when they presented their professional card. “Things have been improving for a few days and the demonstrators are letting us pass”, confirms an ambulance driver, on a lunch break in his vehicle. “But at the start, it was impossible. You had to take impossible roads to hope to arrive.”

Nevertheless, “the personnel cannot always foresee the reception which will be reserved for them on the dams”, says Adrien Niberon. The municipalities of Sainte-Rose and Basse-Terre, in particular, are among the black spots where the passages remain random. Kheira Hue, she is still scalded by the evening of Thursday, the first night of the dams. “We had left in a convoy with colleagues from the clinic, and we came across roadblocks with armed people with chainsaws”. Her son had called her three times that evening. “He wasn’t used to me coming home at 1 in the morning.”