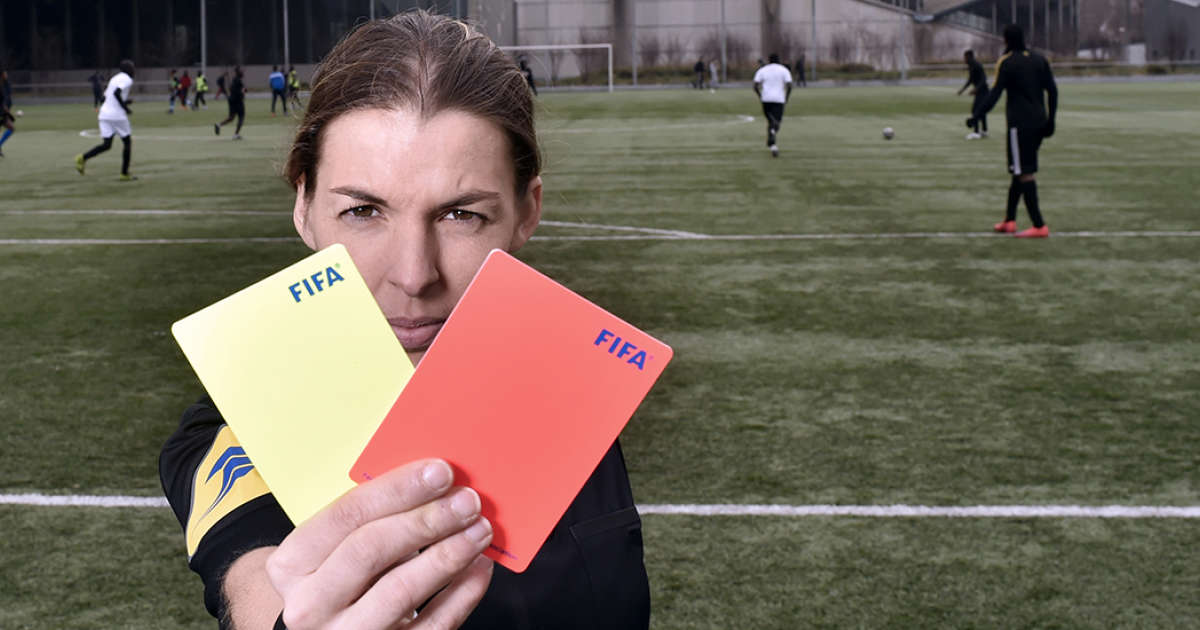 She is the first woman to referee a Euro in men’s football and will be on the sidelines this Friday evening, June 11 for the opening match of the Turkey-Italy competition, as the fourth referee. [celui qui tient le tableau de changements et le temps additionnel].

“L’Obs” presents Stéphanie Frappart, the 37-year-old Frenchwoman who shifts the lines of football.

This is not the first time that Stéphanie Frappart has paved the way for women in football. In 2014, she was the first to referee a match in men’s Ligue 2, then in Ligue 1 in 2019. The same year, she became the first referee of the final of the Women’s World Cup and the UEFA Men’s Supercup. . And a year later, she is still the first to lead an international men’s meeting in official competition for the League of Nations.

Hands off my Champions League!

She has been refereeing football matches since she was… 13 years old. The one who started football at AS Herblay (Val-d’Oise) as a player three years earlier continues to occupy both positions for several years: ball on the foot on Saturday, whistle on the lips on Sunday.

But when she begins her studies in Staps (license in science and techniques of physical and sports activities), she realizes that she can no longer combine the two, despite her very good level as a player. ” I had become a young referee of the Federation and I felt that I had more chances to evolve in refereeing than in women’s football, which was then much less developed than today ”, she told AFP.

In addition to her referee position, she works part-time at the Sports and Gymnastics Federation of Labor as coordinator of activities, which allows her to “Keep a balance”, she declared on RTL in January 2020.

His meteoric career has earned him many accolades. In 2014, she received the award for best referee by the National Union of Professional Footballers. She changed scale in 2019, when she was elected best referee in the world, in the female category, by the International Federation of Football History and Statistics. A title that she gets again in 2020.

EXCLUSIVE. Kylian Mbappé confides in “l’Obs”: “I know the weight of my words and my actions”

It is also referred to as ” personality who makes French football “By the newspaper” l’Equipe “in early 2021, ahead of Kylian Mbappé, Zinédine Zidane or Didier Deschamps. She is also recognized by the Republic: she was named Knight of the National Order of Merit in 2019.

While working in a male environment, Stéphanie Frappart is unfortunately not spared by sexist remarks. Regarding a penalty not awarded during a match between Valenciennes and Laval in 2015, David Le Frapper, then coach of Valenciennes said:

“She didn’t see, she was too far away, I don’t know. Or she was skating before. A woman who comes to referee in a men’s sport is complicated. “

“You’re going to be too fat to get on the air”: because of sexism, these journalists have stopped covering sports

And despite his small size (1.64 m for 54 kg) and his shyness (“I have always been reserved”, she recognizes in the “JDD”) it manages to impose itself and to be respected. To a player who asks him: “Should I call you sir or madam referee?” “, she replies: “What do you think I look like?” ” Since then, no more ambiguity, she is “madam the referee” on the ground.

After the revelations of sexual assault in sport, Stéphanie Frappart was delighted on RTL that the “Speech is freed”. In 2020, she is the godmother of the operation “Female sport always”, which devotes itself over a weekend to making female sport visible in France in people’s minds and on the air.

A year after Sarah Abitbol, ​​confessions of athletes who have broken the silence on sexual violence

In another register, she also appeared at the end of 2020 on the United Football list of Thierry Mercier in the race for the elections at the head of the Ligue de Paris Île-de-France, a body dependent on the French Football Federation and responsible for organizing competitions in the region.