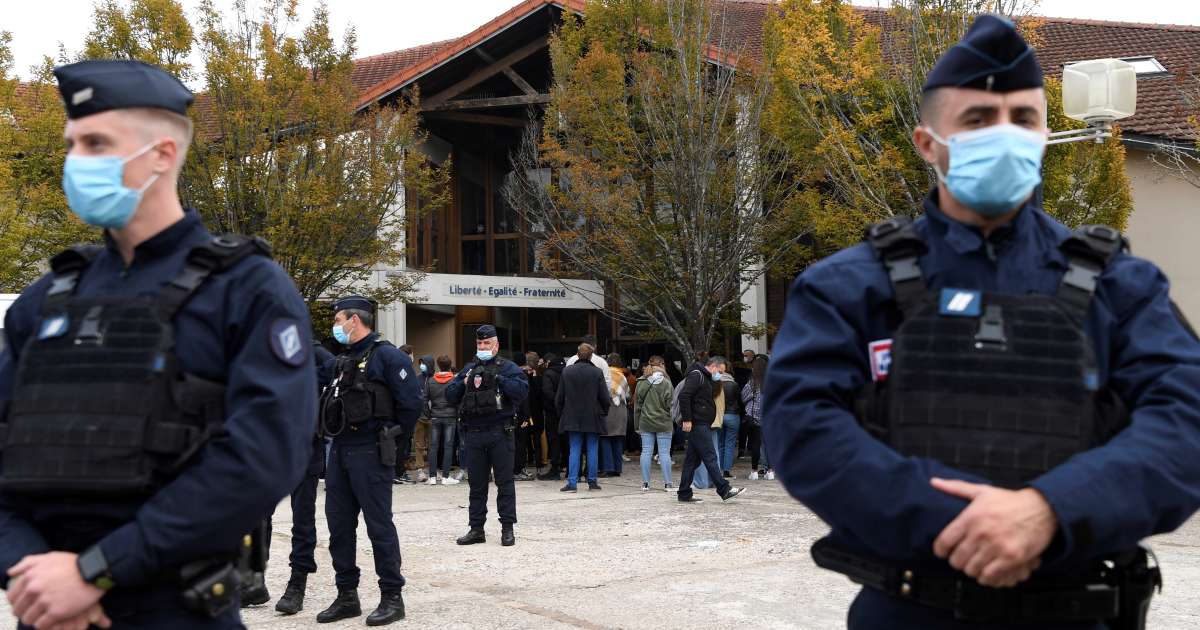 It was on Twitter that Abdoullakh Abouyezidvitch A., 18, the assassin of Samuel Paty, a history professor, in Conflans-Sainte-Honorine, claimed responsibility for his crime. It is 4:55 pm this Friday, October 16 when the account @ Tchetchene_270 publishes a photo of the head of the history-geography professor lying on the ground and the message of the terrorist’s claim: “From Abdullah, the servant of Allah, to Marcon (Emmanuel Macron, NDLR), the leader of the infidels, I executed one of your hellhounds who dared to belittle Muhammad, calm his fellows before you are inflicted a harsh punishment… ”. A few minutes later, the owner of the account gives the identity of his victim: “It’s mr paty. “

As confirmed by the national anti-terrorism prosecutor, this Saturday, October 17, the exploitation of the terrorist’s phone “Made it possible to find in the notepad the text of the claim, recorded at 12:17 pm”. The terrorist thus only needed a few seconds to add the photo to his message of demand and then publish it.

Suspended last night, the account, whose administrator was presented under the pseudonym Al-Ansar (Arabic word for “partisans”, the companions of the prophet of Islam Mohammed), counted up to more than 400 tweets these last few weeks. It had been opened in June 2020. On the social network, the young man mainly published extracts from the Koran. He also regularly shared personal comments on the “disbelief of the Saudi state”, against the bill against separatism, or recently Iran’s condemnation of the republication of the cartoons of Muhammad by Charlie Hebdo. Among its big hundred subscribers, many young members of the Chechen community, some of whom regularly refer to radical Islam in their publications. The punitive expedition led by members of the Chechen community against dealers in a sensitive district of Dijon last June is also mentioned on several occasions by former followers of the account. Since Friday evening and the revelation of the terrorist’s identity, several of these users have also deleted their accounts or modified their settings in order to protect their content. “A vendetta of honor”: why Chechens and dealers clashed in Dijon

Abdoullakh Abouyezidvitch A., he seems to have deleted almost all of his messages before taking action. In addition to his claim and the clarification of the identity of his victim, published in the minutes which followed the attack, only two messages were still visible on the account @ Tchetchene_270 before his suspension by Twitter: a religious war song and a message ” Chechnya is free… ”. A few weeks before his act, he had also changed his profile. The sentence “No woman in mention nor dm” had been replaced by the message “ we are (sic) to God and it is to him that we return ”.

On July 27, this account was the subject of a report by the International League against Racism and Anti-Semitism (Licra) because of anti-Semitic comments published by its user. According to our information, the message, which had been deleted by the social network, described in particular the Jews as ” cursed people “.

This same account was also spotted at the end of August following the dissemination of a photomontage showing a beheading, details Médiapart. The snapshot, from the Turkish TV series’ Diriliş: Ertuğrul ‘, showed a man – the latter has not yet been identified – about to be beheaded by the series’ central character, Ertugrul Gazi, the Turkish leader who founded the Ottoman Empire. According to our information, a Pharos procedure, the French platform for reporting illegal content and behavior online, was also launched against the account on July 30.