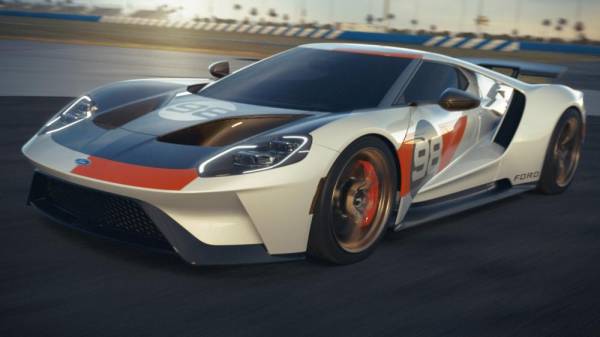 The Ford GT is the only American supercar to have won the Le Mans race. In honor of this victory that cemented the status of high-performance cars, Ford today unveiled a “GT Heritage” car with a design inspired by the original model of the 1966 Daytona 24 Hours winner, as well as a “GT Studio Collection” graphics package that gives customers more touches. Unique exclusive designs.

Mike Severson, Ford GT Program Manager, said: “While designing the GT Heritage Edition, the Ford Performance Car Team went back to the history of participating in the Ford GT in one of the biggest races to create a limited-edition anniversary model The car’s 55th annual victory in the 24 Hours of Daytona, which later led us to victory at the Le Mans race, and for customers wanting to showcase the carbon fiber bodywork and highly efficient cooling vents that contributed to its historic victory in the Le Mans race, the ‘Studio GT Collection’ package comes to offer fans This supercar has the opportunity to customize their cars in a whole new way. “

The announcement of the two new Ford GT models was the highlight of the event at the conclusion of the “Peterson Motor Week 2020”, which began airing on Wednesday on the museum’s famous YouTube channel. The virtual event included 25 hours of original content from a number of leading car manufacturers and enthusiasts, as well as a preview of car enthusiasts’ lifestyles and the activities of the auction house.

The Heritage model joins the Ford GT family of high-performance cars to celebrate the anniversary of winning the 1966 Daytona 24 Hours, in which Ford achieved its first victory in a 24-hour endurance race. And this story was covered in 2019 in the movie “Ford v Ferrari” or “Le Mans 66” as it is known in Europe. Co-drivers Ken Miles and Lloyd Ruby led the Ford team to dominate the Daytona race with 1-2-3-5 results, kicking off an exceptional season for the Ford GTMK.IIAnd additional victories in Sebring and Le Mans with results 1-2-3 The Ford G Heritage is the first car to be decorated with stripes indicating a famous race other than Le Mans.

Severson added, “Miles and Ruby lead nearly all rounds for 24 hours, overtaking their closest competitor by 30 miles. This victory was the first threat to Ferrari’s dominance in sports car racing and a turning point in the Ford GT car program.”

And in colors inspired by the bold white, black and red design of the Ford GTMKIIThe 1966 Endurance Race winner, the GT Heritage model comes in “Frozen White” paint and an exposed carbon-fiber hood to give the car a striking contrast. The rear has a charming view of the witch, while the number 98 comes in its elegant circular shape in the middle of the exposed carbon fiber panels, giving the car an appearance that matches its agility and light weight. Measures in size 20 inches and is paired with polished red monoblock Brembo brake calipers.

The interior, made of lightweight materials and a driver-focused design, features unique finishes, including the black Alcantara leather surrounding the instrument panel, the roof liner and the steering wheel rim, while the red gear shift knob and the distinctive Alcantara seats add contrast. A glamorous interior.

For customers wanting a more aggressive, aggressive look, the optional upgrade package for the Heritage sedan offers 20-inch exposed carbon fiber wheels with an exclusive interior cylinder in a glossy red finish, and monoblock brake calipers painted in sheer black with lettering Brembo Painted in red. Inside, the hidden number 98 engraving creates a slight contrast on the carbon fiber driver and passenger door panels in this package.

The performance car team unveiled the all-new, exclusive Ford Studio Group GT model in the Ford supercar line-up. The all-new graphics package features customizable colors that give more sparkle to key design elements, including highly efficient cooling vents that help the Ford GT 2021 reach 660 hp even on the toughest race tracks and in the hottest temperatures.

The launch of the unique exterior design package is the result of a design collaboration between Ford’s performance car team and “Multimatic”, the manufacturer of the Ford GT. This collection reflects the vision of Garen Nikogossian, Head of Design at Multimatec, who has worked on the Ford GT program since its inception.

Only 40 cars are set to receive the Ford GT Studio Collection during 2021 and 2022. The skeleton and graphics can be customized in seven standard colors or further customized via an expanded assortment that offers endless color combinations for added uniqueness.

Delivery of 2021 Ford GT cars will start in the first quarter of next year, and production will stop in 2022.