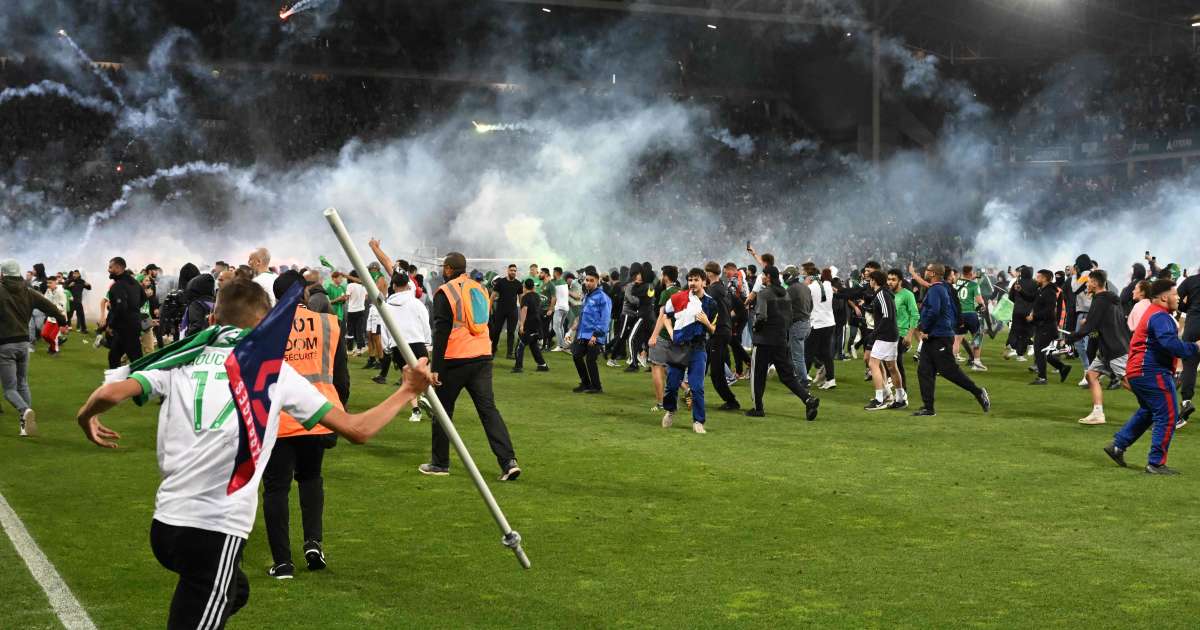 A fatal penalty shootout, an invasion of the field with fire from smoke bombs and scuffles outside its Geoffroy-Guichard stadium: Saint-Etienne, beaten 1-1 (5-4 pens) by Auxerre on Sunday May 29, bids farewell to Ligue 1 in the greatest chaos.

As soon as the last successful shot on goal by the Auxerrois Birama Touré, synonymous with victory for the Burgundians who returned to Ligue 1 after ten years of absence, the field was invaded by thousands of angry supporters. Some sent pyrotechnic devices towards the official platform protected by the police.

Look at the images :

The Saint-Etienne players, surrounded by the stewards, immediately rushed, like the other players in the match, to the locker room. “After the match, I freaked out because I took tear gas canisters, like my players”commented the coach of Auxerre, Jean-Marc Furlan. “We counted ourselves to find out if there were any missing. These incidents are very sad. »

According to the Loire prefecture, two Auxerre players were slightly injured in the scuffles and the Geoffroy-Guichard stadium is again at risk of serious sanctions even though it is on probation because it is a repeat offender of this kind of incident.

On Sunday, the Snella stand was closed following incidents during the reception of Monaco on April 23, a sanction which did not curb the incidents at the end of the match.

The security forces also entered the field and fired tear gas to disperse the crowd, while panic movements shook the stands. And the clashes continued outside the stadium, requiring the use of tear gas and a water-throwing device, said the prefecture, adding that the unrest had ceased at 11:15 p.m.

The balance sheet stands at 14 minor injuries among the police and 17 among the supporters, “Three of whom were taken to hospital for check-ups”according to the prefect of the Loire Catherine Séguin who condemns “these unacceptable, irresponsible and unworthy acts”. According to her, the 1,154 Auxerre supporters and then the players were able to leave the stadium from midnight under police escort.

The mayor of Saint-Etienne, Gaël Perdriau, expressed his “sadness” caused by the “ASSE’s descent into Ligue 2” and sentenced them “dangerous acts with direct fire from smoke bombs aimed at the public […]as well as damage and acts of vandalism”.

Relegation penalizes a disastrous season for AS Saint-Etienne, which had snatched the right to play in the play-offs in extremis after a draw in Nantes (1-1) during the 38e and last day of the championship. Over the season, ASSE only totaled 32 points.

As soon as the relegation was consumed, a press release from the shareholders announced the next sale of the club. Roland Romeyer and Bernard Caïazzo promise “an important news concerning the future of the club and ours”adding that“an essential page of our life will turn”. In the greatest confusion.