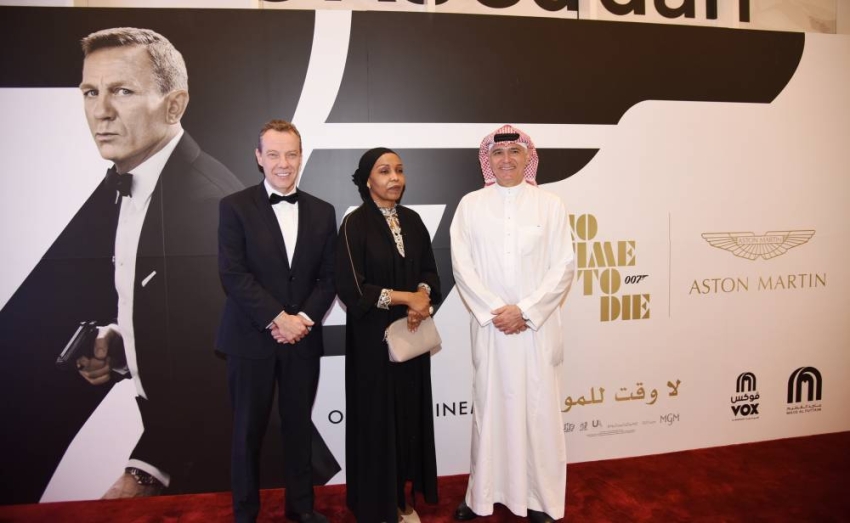 At the invitation of Haj Hussain Ali Reda & Co. Ltd., Aston Martin car dealers Saudi Arabia Secret agent 007, the international actor, Daniel Greig, appeared on the cinema screens in the Kingdom of Saudi Arabia, after he was absent from the “Covid-19” virus and delayed his last adventure show. Many hope that the screening of “No Time to Die”, the last in the series by actor Craig with the international series of James Bond films, will be an indication of the return of the audience to cinema halls in the Kingdom after long periods of closure..

Aston Martin had previously announced the launch of a “No Time To Die” Special from Aston Martin DB5 Junior, based on the 25th James Bond movie No Time to Die, which opens in cinemas around the world from September 30 and sees Aston Martin return DB5 famous. The result of a unique collaboration with The Little Car Company, to produce an unmissable collectible model, complete with a complete set of tools and equipment, as well as an all-electric powertrain.

Aston Martin Saudi Arabia had invited its major customers and adventure lovers to watch the premiere of this movie in honor of its customers to enjoy the thriller and action movie in addition to enjoying the performance of the car during this movie.

Car always shinesDB5 From Aston Martin in the James Bond films, and also achieved widespread fame after her last appearance in the latest films of the series, so a miniature model was released, under the nameDB5 Junior special for the movie “No Time to Die”, integrated with a wide range of gadgets and devices, that the audience has always known from the previous Secret Agent series.

“I was amazed when I saw the performance of a carDB5 Junior is on the screen for the first time, as if we are seeing it on the ground in front of us because of the accuracy of its design and its compatibility with the performance and luxury of Aston cars with a great historical heritage, and I think it is a true engineering masterpiece.”

He concluded: “The DB5 gadget-optimized car has always fascinated brand customers and movie-series fans as the most popular car in cinema for more than 50 years. Today, we seek to continue this legacy through an exclusive partnership with Aston Martin, as we aim to seize this opportunity. And providing an exceptional and unique model to our customers in Saudi Arabia who enjoyed showing the film, and we look forward to exploring the distinctive and diverse experiences that these cars will provide for adventure lovers.“

The No Time To Die movie special was released to celebrate a rich history of collaboration between leading brands, featuring Silver Birch paint, Smith tools, individually numbered body plates and the Aston Martin logo. This version reflects the lifestyle of the world’s most famous secret agent, James Bond, as its performance is characterized by its strength and speed, which gives it a level of performance worthy of cinema films.”

Oscar-winning Special Effects Officer Chris Corbould, who has worked on 15 films in the series since 1980, provided his own advice to Aston Martin to design the state-of-the-art custom kit and hardware for the car. DB5 Junior.