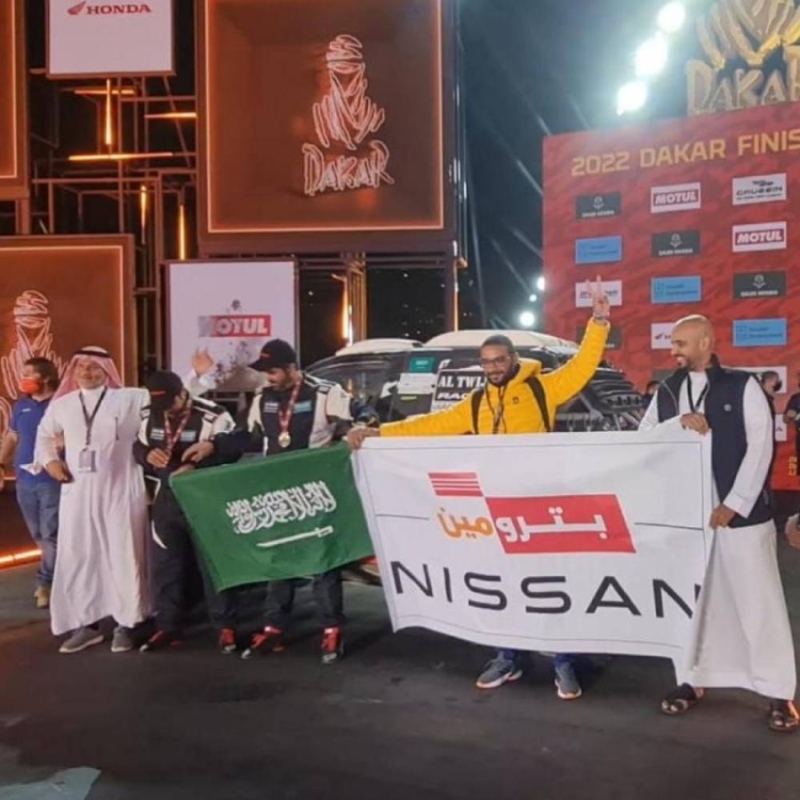 The Al-Tuwaijri team, led by the driver Mohammed Al-Tuwaijri and his support team from Petromin Nissan, succeeded in achieving a great victory, adding a new achievement to the Kingdom of Saudi Arabia, by obtaining third place in the open car category, during the Dakar Rally 2022 activities that were held from January 1 to 14, 2022. Al-Tuwaijri’s experience in highly challenging races, coupled with the power of Nissan’s engines, played a major role in passing the race in its various stages, starting from the Hail region to the city of Jeddah, the final point.

On this occasion, Mohammed Al-Armani, General Manager of Marketing, said: “We congratulate the Al-Tuwaijri team for this precious victory, which added to it another record of brilliant achievements in the world of fierce racing. Petromin Nissan has proven its efficiency and demonstrated its strength in a well-deserved manner, while the experience of the rider Mohammed Al-Tuwaijri was demonstrated in overcoming all challenges.” Dakar Rally, which put him in the category of great competitors.”

For his part, Mohammed Al-Tuwaijri expressed his happiness with this wonderful victory, adding that it was a good stage and completely different in terms of its challenges and excitement. We were looking forward to achieving first place and dedicating a higher achievement to the Kingdom, but it is an exciting experience anyway, and we aspire to advance the ranks next time.”

It should be noted that the “Dakar” is considered one of the long-distance rally races, and represents an unparalleled human adventure, and this is a secret that distinguishes it. As a fierce competition in the world of extreme sports and the most challenging race in terms of navigation and guidance, the Dakar Rally brings together the most prominent drivers and cyclists in long-distance rallying around the world and amateur competitors who participate with the aim of achieving their dreams and an amazing experience and adventure to overcome the toughest challenges of the road on bikes Motorcycles, ATVs, cars or trucks.