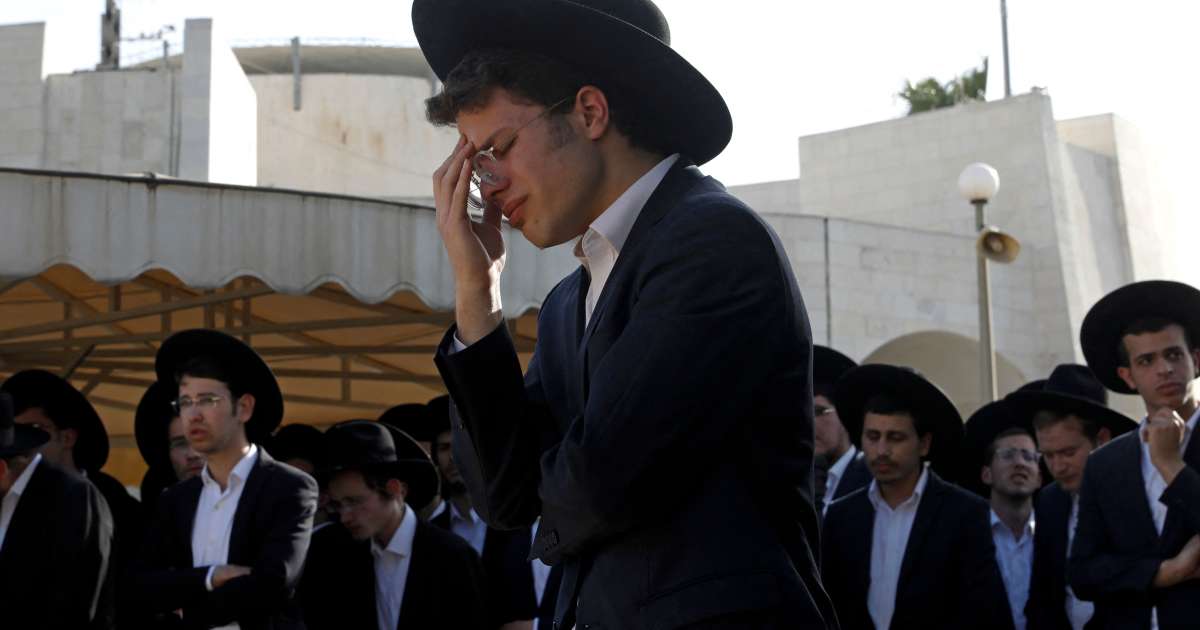 Flags are at half mast Sunday in Israel for a day of national mourning over the deaths of 45 people, including children, in a giant crush on a pilgrimage bringing together tens of thousands of Orthodox Jews.

“Disaster”, “Tragedy”, “Government failure” : the Unes de la presse were all crossed out in black on Sunday for the first newspapers published in Israel since the stampede that occurred early Friday morning at Mount Meron, in the north of the country, the press not publishing on Saturday, Shabbat (rest) .

The first funeral took place as early as Friday afternoon in what Prime Minister Benjamin Netanyahu called “One of the greatest catastrophes” of the history of the Hebrew state since its inception in 1948.

Giant stampede kills more than 40 on Jewish pilgrimage to Israel

After a Shabbat break, funerals resumed on Saturday evening. And authorities announced Sunday that they had finished identifying the dead, including four Americans and two Canadians.

Whose fault is it ?

“Around midnight, the identification of all 45 victims (…) was completed. Forty-four remains were handed over (to families) for burials and one last will be during the day ”, said the Ministry of Health in a statement.

“A disaster of such magnitude requires complex analytical work (…) We understand families’ requests for rapid analyzes, and we have acted in this direction without compromising professionalism”said Dr. Chen Kugel, director of the Abu Kabir National Institute of Forensic Medicine in Tel Aviv.

Images of Méron’s murderous stampede, “one of the most serious catastrophes in the history of Israel”

Blue and white flags set with the Star of David were at half mast on Sunday in front of government buildings on the occasion of a national mourning, while funerals multiplied, mainly in Bnei Brak near Tel Aviv and Jerusalem, and that families were going through the Shiv’ah, a period of mourning of seven days.

On Saturday evening, citizens of Tel Aviv, a metropolis on the Mediterranean coast, organized a first ceremony by lighting candles in tribute to the victims.

“It touches me personally because I come from an ultra-Orthodox home. Until eight years ago, I too went on a pilgrimage to Meron. My parents were present in Meron this year and left for an hour ” before the tragedy, Rachel, 28, told AFP on site.

“For 20 years, I also made the pilgrimage to Meron. Once, I also experienced a stampede (…) It was the scariest moment of my life, and I haven’t been back since ”, added Yael, another young woman also present at the ceremony.

Through the mourning, questions kept tormenting the Israelis: what really happened at Mount Meron? whose fault is it ? could the drama have been avoided?

According to the first indications, tens of thousands of Orthodox Jews were gathered on the night of Thursday to Friday at Mount Meron for the resumption of an annual pilgrimage, after a year of hiatus due to the pandemic, as part of the holiday Jewess of Lag Baomer.

A minister in the hot seat

Around 00.50 a.m., on the sidelines of a “Bonfire”, a mass of people left the scene but the exit required at one point to pass through a narrow corridor, which caused a bottleneck, witnesses told AFP.

Worshipers, mostly young men and teenagers, were crushed in the panicking crowd. The chief of police for northern Israel, Shimon Lavi, took the ” responsibility “ of this tragedy.

But this declaration did not end the debate on those responsible for this tragedy, especially as many have been repeating for years that security at this gathering was often uncertain. Minister of Public Security Amir Ohana said this weekend to assume responsibility for ” responsibility “ without accepting the “Blame”.

And the Minister of Transport, Miri Regev, close to Prime Minister Benjamin Netanyahu, was in the hot seat for having, according to the local press, chartered buses to allow ultra-Orthodox to go to this pilgrimage. But the largest gathering since the start of the pandemic in Israel, a country mostly vaccinated and almost entirely deconfined, has turned into a tragedy.

Israel’s Ashkenazi Chief Rabbi David Lau on Sunday suggested that the celebrations at Mount Meron “Stretch in the future over a week” in order to avoid too large gatherings.